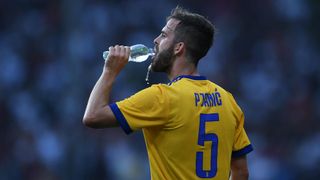 Miralem Pjanic suffered a thigh strain ahead of Juventus' Champions League win over Olympiacos on Wednesday.

The former Roma midfielder had been set to line up alongside Blaise Matuidi in the Bianconeri midfield, but he pulled up in the warm-up.

Rodrigo Bentancur came into the Juve side - with Gonzalo Higuain and Mario Mandzukic on target in a 2-0 success - and Pjanic underwent initial medical checks on Thursday to assess a thigh injury.

Having identified a strain, Massimiliano Allegri's men will send the 27-year-old for further tests to ascertain the length of his lay-off.

NEWS: There's a late change to the Juventus XI as Bentancur replaces Pjanic after a problem in the warmups. September 27, 2017