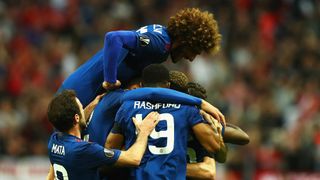 Paul Pogba and Henrikh Mkhitaryan got the all-important goals as Manchester United saw off Ajax in the Europa League final, but how did all the players stack up individually?

The former Barcelona youngster looked nervous early on and was beaten by United's first shot on target, although there was not much he could do about Pogba's opener following the wicked deflection off Davinson Sanchez. Did well to deny Valencia halfway through the first half, but conceded again on United's third attempt on goal as Mkhitaryan poked home from close range.

Hardly ever troubled during the opening 45 minutes as he kept Mkhitaryan at bay with ease. Lost a crucial duel early in the second half, though, as the Armenia international reacted alert to make it 2-0.

Was unfortunate to deflect Pogba's shot past Onana for the opener. Strong as ever in the personal duels, but uncharacteristically sloppy on the ball.

Became the youngest ever player in a major European final with his appearance in Stockholm and was Ajax's best defender on the night. Put in a strong performance to keep Rashford quiet and was tidy on the ball.

Took the suspended Nick Viergever's place in the starting XI, but endured a difficult evening. His poor throw-in led to the opener and he was beaten too easily by Valencia in the 23rd minute, allowing the right-back to test Onana with a powerful shot.

The Ajax captain was partned with Pogba and came out second best for the majority of the game. Allowed the France international too much space as he unleashed a shot from the edge of the box that led to the opener.

A rare experienced head in the Ajax XI, but he was unable to show the Amsterdammers the way. Never stood a chance against Fellaini in the air as he was beaten time and time again by the Belgium international.

Ajax's big-money signing failed to add some much-needed creativity to his team as their attackers were hardly ever reached. Kept out of the game by Herrera.

The Chelsea loanee made a lively start and caused Darmian all kinds of problems before the break. Forced Romero into a good save with a powerful shot in the ninth minute.

Hugely talented, but endured a miserable evening as he hardly touched the ball. Unable to shake off Smalling and unsurprisingly hooked after the break.

1 - Kasper Dolberg's first touch in the Europa League final was the kick-off after Paul Pogba's goal. Isolated. May 24, 2017

Made an encouraging start when he danced past Valencia before setting up Traore, but largely anonymous from there on.

Took the disappointing Dolberg's place after the break. Poor finishing prevented him from adding his name to the score sheet well into stoppage time.

Brought on for Schone with 20 minutes left on the clock and could have pulled one back in the 87th minute, only to aim a shot straight at Romero.

Was not tested too much, but showed his class whenever called upon. Made a fine save to deny Traore in the opening stages of the game.

Beaten too easily by Younes early on, but recovered well to keep the German winger quiet. Came close to finding the net when he tested Onana with a stinging shot from a tough angle.

Solid as a rock in defence as he completely nullified Dolberg. Capped a fine outing by providing the assist for the 2-0 by winning the aerial challenge after a corner.

Provided his fellow defenders with cover whenever needed. Made a vital interception before the break when Traore appeared to be on his way to Romero.

Had a difficult evening against Traore as the Burkina Faso international kept on taking on his direct opponent. Held his own in the end, but did need Blind's help on one or two occasions.

Might have had a fair bit of luck, but scored the crucial opener to put United in command. Held the edge over Ajax captain Klaassen throughout the game, not shying away from his defensive duties.

Did a great job shielding United's back-four and shutting out Ziyech. Did not get involved too much on the ball, but has every reason to be satisfied with his display.

Did well to set up Pogba for the 1-0 and was key to United's tactic on the evening, winning the large majority of his aerial duels as Jose Mourinho's men went for the direct route forward.

Got the nod ahead of Jesse Lingard down the right, but did at no point proved Mourinho right. Ineffective throughout the game and fortunate not to be dismissed for a late tackle on De Ligt.

United's main man up front lacked the support to make much of an impact, often finding himself up against at least two defenders. Bullied off the ball more than once by De Ligt and Sanchez.

Put in an absolute horror performance in the opening 45 minutes, losing possession time and time again as well as conceding a yellow card after a number of silly fouls. Had one good moment all evening, but it was a decisive one as he doubled United's lead with a clever finish from close range.

Replaced Mkhitaryan in the 74th minute. Could have netted a third, but hesitated too long.

Anthony Martial and Wayne Rooney: Too late to mark