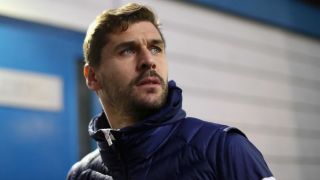 Mauricio Pochettino says the small amount of time between the World Cup and the Premier League season presents a "massive opportunity" for Lucas Moura and Fernando Llorente to kick-start their Tottenham careers.

Spurs have been without nine players on their tour of North America, including Harry Kane and Dele Alli, due to their involvement in the latter stages in Russia.

That enabled back-up striker Llorente and Lucas, a January signing from Paris Saint-Germain, to take centre-stage against Roma on Wednesday, both men scoring twice in a 4-1 win.

Pochettino was impressed with their efforts and is hoping they can maintain it over the coming weeks.

The Argentine said: "The pre-season is a little bit different to before because of the World Cup and we've got so many players away.

"It's a massive opportunity for them to fight for a place in the starting XI.

"Of course, I'm happy when the striker scores and finds the net. Both Lucas Moura and Llorente, I am pleased for them. They are working so hard."

Pochettino joined Manchester United manager Jose Mourinho in lamenting the short turnaround between the World Cup and the start of domestic competition.

The Spurs boss added: "To prepare [for] the season in this way will be tough for them [the players] and us. I need to adapt [to] what the Premier League propose.

"They need to rest. The players need a period to recover after more than 10 months of competition – they need 20, 21 days to be away from football.

"Some teams have more problems than others. That is the reality and we cannot change it."