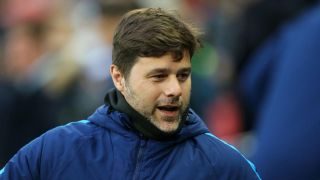 Mauricio Pochettino insists he will not force a switch to Real Madrid, as the Tottenham manager intends to let his football "destiny" play out.

With three-time Champions League winner Zinedine Zidane quitting as Madrid coach on Thursday, the European champions are suddenly required to source a replacement.

Pochettino, despite recently signing a contract renewal at Spurs, has long been linked with a move to the Santiago Bernabeu and features prominently among the favourites.

But the former Southampton boss, in Spain to promote a book on his time at Tottenham, claimed he is content in north London.

"I'm very happy at Tottenham," Pochettino told a news conference. "It would be disrespectful to Daniel [Levy, Tottenham chairman] for me to force a move. I've just renewed with Tottenham and I am happy.

He added to AS: "I live in the present - there is nothing more important than that. I enjoy what is happening and what has to be will be.

"[Newell's Old Boys academy coach] Jorge Griffa once told me that I must let football take me, that I do not want to change my destiny."

Pochettino also put to bed talk of a release clause in his new deal that would allow an easy exit if Madrid came calling.