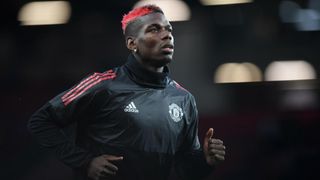 Paul Pogba continued his rehabilitation from injury as a Twitter video, which was swiftly deleted, showed him going through running drills.

The France international picked up a hamstring problem during Manchester United's 3-0 Champions League win over Basel on September 12.

United manager Jose Mourinho described Pogba's expected absence as "long-term" but there were signs of encouragement on social media on Sunday.

Along with the caption "Baby I missed you", Pogba posted a 40-second video of him putting on a pair of boots and undergoing jogging exercises.

The tweet was later taken down but will serve to encourage United, who battled to a dour 0-0 draw at Liverpool on Saturday and travel to Benfica in the Champions League in midweek.