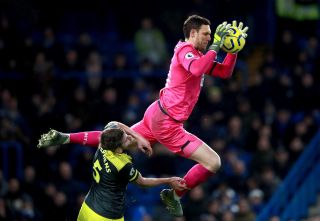 Liverpool may have all-but sewn up the Premier League title in January, but there is still plenty to play for in the Fantasy Premier League.

And who better to guide you on your quest for FPL glory than managers with a proven track record?

We have identified over 250 bosses who each have at least five top 10,000 finishes, and taken a peek at their notepads to find out who they’ve been transferring in.

The two players who saw the biggest rise in ownership between gameweeks 22 and 23 come from 13th-placed Southampton.

Danny Ings has been in fine goalscoring form, with only Jamie Vardy and Sergio Aguero ahead of him in the charts, so it is no surprise to see his fan base grow – but the fact that he is now owned by over two thirds of this elite sample makes him a must-have.

A blank against Wolves will have done little to deter managers when he costs a mere £6.9m.

The appeal of Ings’ teammate Alex McCarthy is less obvious, but the former Reading keeper has seen the second largest increase in top brass ownership.

After watching from the sidelines for the first 10 matches of the season, McCarthy has since started 13 in a row but has only scored more than three points on two occasions.

A modest £4.4m price tag and a favourable run of fixtures for the Saints however might be enough to tempt you to bring him in.

The next name on our list of players who are rising in popularity amongst the proven pros is Mohamed Salah.

Salah started the season with a whopping 97.9% ownership among this group of managers, but fell to less than 75% by the third gameweek of the season.

The Egyptian’s stock had fallen to an unthinkable 5.9% as little as five weeks ago, but he has seen a dramatic resurgence since then.

Salah is now back in the squads of over two thirds of top managers, who were no doubt preparing for Liverpool’s impending double gameweek, which is followed by a run of five straight matches rated two out of five on the Fixture Difficulty Rating (FDR) system.

Williams is on brand

The defender with the largest surge in selection meanwhile is Manchester United’s teenage left back, Brandon Williams.

Williams is the only player with an initial price £4m (the lowest starting point in the game) to have made more than two appearance for one of last season’s top-six clubs.

With three starts in United’s last four matches, including against arch-rivals Liverpool, hype surrounding the homegrown talent seems to be growing by the day.

He may not be a guaranteed source of points – he has just three scores of more than two points this season – but his low price tag could make room for more premium players in your side.