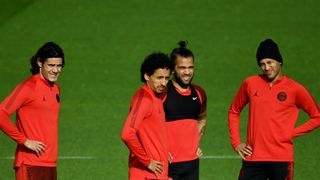 Dani Alves and Layvin Kurzawa are still some way off making their first appearances of the Ligue 1 season for Paris Saint-Germain, says head coach Thomas Tuchel.

The defensive duo have yet to feature under the German coach in the league after being ruled out with knee and back injuries respectively.

PSG have not missed them, however, winning all 13 of their matches in 2018-19 prior to the international break to top the table by seven points.

Both men have returned to training in recent weeks but Tuchel is not expecting to have either available in the near future.

"Their return is very important," Tuchel told PSG's website. "You can see Dani is growing in confidence.

"He's a player who has never doubted, and who is important, notably thanks to his career.

"Layvin is a little more reserved, and his return is important because we're lacking players who can play on the left.

"But I feel they're still not 100 per cent ready, and that it'll take a little more time before they're completely ready."