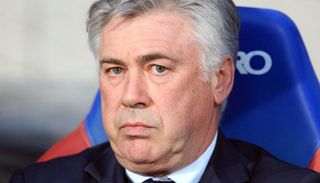 "They [Real] came and I discussed it with them. He's got a contract with us for one more year... for me, he's here next year," Al Khelaifi told Reuters.

"He's a fantastic guy and I'm sure he'll respect his contract."

Ancelotti refused to confirm he would stay at PSG on Sunday after they secured their first Ligue 1 title since 1994.

"We are going to talk with the club," said the Italian who joined the team in December 2011.

Al Khelaifi explained he had no immediate desire to discuss the issue with Ancelotti who has been linked with Real in recent weeks after media reports suggested Jose Mourinho would be leaving the Spanish team to rejoin former club Chelsea.

"Today I don't have any plan to meet him because he has a contract. Now it's time to celebrate and to enjoy the moment," said the PSG president.

Al Khelaifi added that he wanted to extend David Beckham's contract after the former England captain joined PSG on a short-term deal in January.

"David is a fantastic player, very professional and a great guy. We want to keep him but it depends on what he will decide," he said.

"He's very happy here, I spoke to him yesterday and last week and he wants to be linked to the club."

"He went for some checks but he's out now," said the club president. "He will be there to celebrate the title with us [later on Monday]."

Brazilian Leonardo is also expected to stay at PSG next season although he faces a lengthy ban for allegedly pushing referee Alexandre Castro after a 1-1 draw against Valenciennes earlier this month.