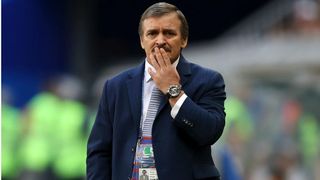 Oscar Ramirez will not be continuing as Costa Rica coach following the team’s failure to reach the knockout rounds at the World Cup.

Costa Rica, who progressed to the quarter-finals four years ago in Brazil, claimed just one point as they were eliminated from Group E in Russia.

Ramirez, who took over in August 2015, revealed after the 2-2 draw with Switzerland on June 27 that he was unsure of his future, and Fedefutbol president Rodolfo Villalobos confirmed on Wednesday that the 53-year-old will not continue in the role.

"Oscar Ramirez's contract is not going to be renewed," Villalobos told a news conference.

"After the match in Switzerland we talked internally in the delegation and we are clear that at that moment our process started towards Qatar 2022.