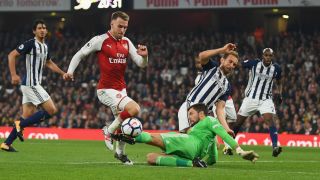 Arsenal midfielder Aaron Ramsey wants the Gunners to make the Emirates Stadium "a fortress" to give them a good shot at the Premier League title.

Arsene Wenger's side made it three wins and from three at home in the top flight this season with a 2-0 win over West Brom on Monday.

Two goals from Alexandre Lacazette secured the victory to send Arsenal back to within six points of leaders Manchester City, who joined Manchester United, Chelsea, Liverpool and Tottenham in winning at the weekend.

Ramsey was delighted to see his side match the result of the title favourites and has urged them to keep up winning ways at home.

"It was a fantastic performance," he told Sky Sports. "After all the results, none of them went our way at the weekend and we had to take full advantage of the fact we were at home.

"They've very strong this season so it's going to be a tough year, there's a lot of quality in those teams so it was important for us to get the win.

"We know they've very well organised and get plenty of players behind the ball. It's just a case of being patient and alert to the counter-attack. We always know it's going to be difficult against them.

"We want to make the Emirates a fortress. We've had three wins and hopefully we can build on that."

Ramsey feels Arsenal's organisation has improved since their 4-0 thrashing by Liverpool at Anfield last month, with Wenger's side having kept four clean sheets in five games since that loss.

"We saw against Chelsea we were a lot more organised and we perhaps could have nicked it at the end," he said. "That's the kind of performance we need away against the top teams and it was chalk and cheese to the game against Liverpool.

"We were a lot more organised, the distances between the units were a lot smaller. Against Liverpool, our distances were too big, the gaps between defence and midfield was massive."