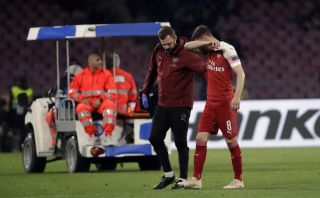 Unai Emery has revealed Aaron Ramsey is hoping to play again within three weeks after he suffered an injury against Napoli on Thursday night.

Ramsey limped out of Arsenal’s 1-0 Europa League quarter-final win at Napoli as the Gunners secured a 3-0 aggregate victory to set up a meeting with Valencia in the last four.

There were fears the 28-year-old, who will leave on a free transfer for Juventus when his Arsenal deal expires in the summer, might have played his last game for Arsenal.

After returning from Naples overnight, the Arsenal squad had a small training session at their London Colney base on Friday.

Emery, who said post-match in Naples that Ramsey had suffered a “muscular” injury, confirmed he had spoken to the midfielder and he feels he could play again for the club before departing for Juventus.

“I was speaking to him about 30 minutes ago and we were speaking about that – ‘Maybe in two or three weeks, I can play some matches’,” Emery told Sky Sports on Friday afternoon.

“We are going to wait for that – his injury is also bad news and I don’t know how long it will take him out of the team, but maybe two or three weeks.”

Emery also suggested the uncertainty over Ramsey’s future led to inconsistent form earlier in the season, but praised the Wales international for how he has performed in recent weeks since his deal to Juventus was announced.

“His process this season has been amazing,” Emery added.

“In the beginning a little confused because it was the last year of his contract with the club.

“For us, and for me, he is a very important player, but his confusion maybe did not give us some moments in the season, the performances like he is doing now.

“The last matches his performances have been amazing and helped us a lot in the key moments this season.”

Arsenal have announced their Premier League fixture at Leicester has been rescheduled ahead of the first leg of their Europa League semi-final at home to Valencia on May 2.

Originally set for a Monday night, the game at the King Power Stadium will now kick off at midday on Sunday, April 28.