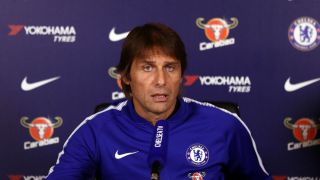 Claudio Ranieri understands the frustrations Antonio Conte may have at Chelsea but he does not expect the Italian to depart Stamford Bridge early.

Conte's future at Chelsea appeared in doubt during the close season, despite lifting the Premier League trophy last term, but he signed a new deal with the club – albeit only an improvement in pay and not an extension.

The transfer window was difficult for Conte as Chelsea saw targets Romelu Lukaku, Fernando Llorente and Alex Oxlade-Chamberlain move elsewhere, while a reported deal for Ross Barkley broke down.

Alvaro Morata, Tiemoue Bakayoko and Antonio Rudiger were three of six players to arrive, but Chelsea already find themselves six points behind leaders Manchester United and City after seven matches.

That has led to more speculation that Conte could leave Chelsea before his contract expires in 2019, but Ranieri – himself a former Blues boss – expects his compatriot to stay.

"Maybe he was expecting a different transfer campaign, but for a few years now [Roman] Abramovich hasn't been doing crazy spending.

"Manchester United and Manchester City have made great signings, so I imagine it’s more draining for Antonio to be fighting on two fronts with the same players."