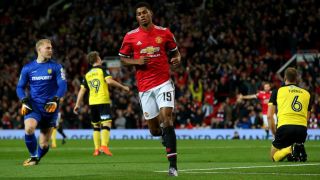 Rio Ferdinand believes Marcus Rashford is on track to emerge as one of the world's best footballers, but needs to catch up to his contemporaries.

The 19-year-old has five goals in all competitions this season, cementing a starting spot at Manchester United in the process.

With Jose Mourinho's side facing rivals Liverpool on Saturday, Ferdinand was full of praise for the England international.

"He is a great talent and he's doing well," Ferdinand told The Mirror. "He looks like he's maturing. He is improving, he is hungry and he is getting opportunities this season.

"He is somebody who can be a huge talent for United and England, and he's at the right place to do that.

Though Rashford's performances have earned a nomination for the Golden Boy award, the former Champions League-winning defender believes he must perform at the highest level to be considered an equal to the likes of Ousmane Dembele and Kylian Mbappe.

"I think potentially he is as good as those guys, but they have done it in the Champions League, while he is yet to prove that.

"He has to keep proving himself, and there are so many hurdles you have to get over. These young players, we are too quick to say, 'He can be this or that'.

"If he keeps improving, keeps working at his game and stays in love with football, he has got as good a chance as any kid in the game to be a real success and a huge star."