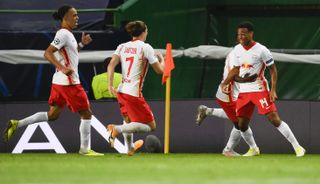 The 21-year-old American struck the decisive blow after 88 minutes as the tie looked to be heading for extra time. His low shot from the edge of the area appeared to be going wide but hit Stefan Savic and the ball flew past the helpless Jan Oblak in goal.

Atletico, runners up in this competition in 2014 in Lisbon and again in 2016, saw a substitute of their own bring them back into the match when Joao Felix equalised from the penalty spot midway through the second half.

Spaniard Dani Olmo had given Leipzig the lead at the start of the second half as Julian Nagelsmann’s side – who were founded in 2009 – became the first German team outside of Bayern Munich or Borussia Dortmund to reach the semi-final of the Champions League since Schalke in 2011.

Atletico were without Angel Correa and Sime Vrsaljko after they returned positive coronavirus tests last week but Leipzig were regarded as the underdogs, with top scorer Timo Werner having left to join Chelsea at the end of the Bundesliga season.

It was Leipzig who made a strong start to the match and had a good chance to take an early lead.

Atletico, uncharacteristically, failed to deal with a corner and the ball dropped to Marcel Halstenberg inside the penalty area but the big defender was unable to keep his shot down.

It may have acted as a wake-up call for the Spanish club, who then threatened three times in quick succession.

A looping header from Savic momentarily caused Peter Gulacsi problems but the Leipzig goalkeeper was able to sort out his feet and make an athletic catch, falling to the ground on the goal-line.

Good work down the left saw Yannick Carrasco advance into the penalty area before attempting to beat Gulacsi at his near post. However, the Hungarian made a fine save, beating away the ball with two hands.

From the resulting corner, Jose Gimenez saw his free header strike a defender before Saul felt he was tripped by the goalkeeper when retrieving the ball but the incident was checked by VAR and no penalty was awarded.

The game settled down thereafter, with the last real chance of a largely attritional first half coming in stoppage time when Dayot Upamecano’s downward header from a corner was straight at Jan Oblak.

The games’s first moment of brilliance came five minutes into the second half and it saw Leipzig take the lead.

The German side switched play from left to right and when the cross came in from Marcel Sabitzer, Olmo was on hand – unmarked – in the middle and headed the ball across goal, past Oblak and into the far bottom corner of the net.

Atletico boss Diego Simeone did not take long to respond and brought on Felix. After Lodi received a yellow card for diving, attempting to win a penalty after going to ground under a challenge from Upamecano, Atletico were given a spot kick and Felix stepped up to take it.

The young forward, formerly of Benfica, confidently stroked it home, bringing his side level back in his home city. It was he that won the 70th-minute penalty, surging forward and drawing the tackle from Lukas Klostermann after feigning to shoot.

Atletico’s tails were up and Leipzig had to withstand some late pressure, with Carrasco twice going close and bringing a save from Gulacsi on one occasion.

However, it was Leipzig who would win the tie. A great throughball from Sabitzer to pick out Angelino on the left saw the marauding left-back square the ball to Adams on the edge of the box and his shot deflected in off Savic.

A combination of Upamecano and Gulacsi denied Alvaro Morata deep into added time as Leipzig held on for a historic victory to seal a semi-final spot against Paris St Germain.