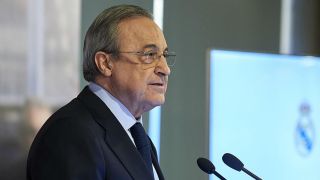 Real Madrid president Florentino Perez is confident Los Blancos are still capable of success on all fronts despite their troubled start to the season.

But despite the disastrous nature to Lopetegui's four-month tenure, and their continuing search for a permanent boss, Perez says nobody should doubt Madrid's qualities.

"We've got a great squad which has proved that it's capable of winning everything going," Perez told attendees at an event to commemorate Madrid's members.

"I want to state that all of our targets for this season remain intact.

"We are experiencing one of the most extraordinary stages in the history of Real Madrid. We have to value this and what we are achieving.

"This team has won absolutely everything. We've managed to achieve a historic feat that's practically impossible to repeat: lifting three Champions League crowns in a row and four in five seasons."