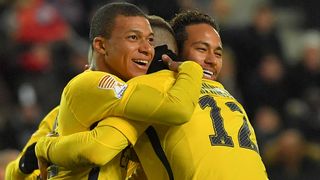 Kylian Mbappe was sent off as Paris Saint-Germain booked their place in the Coupe de la Ligue final with a 3-2 win over Rennes on Wednesday.

The 19-year-old, who returned to the starting line-up after missing two games with a back injury, was shown a straight red card for a poor challenge on Ismalia Sarr in the second half at Roazhon Park.

The dismissal did not prove fatal to PSG's hopes of keeping alive their quadruple chase, though, with Thomas Meunier, Marquinhos and Giovani Lo Celso having put the game beyond Rennes' reach inside the hour, although they were forced to hold on in the dying minutes.

PSG came into the fixture having not lost a Coupe de la Ligue match since a penalty shootout defeat to Saint-Etienne in November 2012, but they struggled to find their feet until Meunier blasted in a volley 24 minutes in.

Marquinhos made it 2-0 from close range eight minutes after the restart and Lo Celso's first goal for the club soon followed, the midfielder scoring just 13 minutes after coming on to replace Javier Pastore.

Mbappe earned his first red card of his club career with a crude lunge 63 minutes in, with referee Mikael Lesage showing a red card after a VAR referral, and Diafra Sakho's debut goal gave the home side some hope.

Sanjin Prcic fired home a second in injury time but PSG survived to reach yet another domestic final.

There were no chances at all in the opening quarter, with PSG looking extremely flat in possession and Rennes regularly seeing promising counter-attacks break down with a poor final pass.

Meunier took responsibility to light up the semi-final in the 24th minute, though, bundling his way through challenges on the edge of the area and launching a sublime dipping volley that flew into the left-hand corner of the net.

Rennes sought a quick response but the lively Sarr earned nothing but a place in the referee's notebook when he went to ground under no contact from Meunier in the penalty area, when he had a good chance to fire the ball across goal.

The home side thought they had equalised two minutes before the break, when Khazri forced his way into space in the area before prodding the ball past Kevin Trapp, but the goal was disallowed for a handball after a VAR review.

VAR was again called into action soon after the interval, with Mbappe's neat finish ruled out for offside, but PSG did not have long to wait to double their lead.

Marco Verratti played a pinpoint pass to Neymar, the Brazilian teed up Angel Di Maria to strike it goalwards and, although Abdoulaye Diallo got down to his left to make the save, Marquinhos was on hand to tap in the rebound.

Five minutes later, PSG had their third. Di Maria did well to flick the ball into Lo Celso's path while on the floor, and the midfielder drove into the area before squeezing a shot beneath Diallo, who should really have done better at his near post.

The visitors were beginning to enjoy themselves but Mbappe spoiled their outing 63 minutes in, when he was given a straight red card following another VAR referral after raking his studs down the calf of Sarr, who had to be replaced.

Rennes snatched a lifeline with five minutes to play, with Sakho heading Ludovic Baal's cross expertly into the right-hand corner of the net, and Prcic blasted home from 25 yards out to give the hosts some hope of a remarkable comeback.

PSG held on, however, to book a fifth final in a row, where they will face either Monaco or Montpellier.