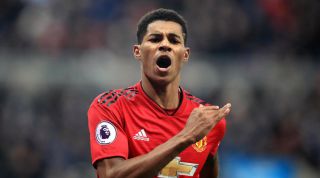 Marcus Rashford has been ruled out of action for at least two months after suffering a double stress fracture in his back.

That leaves Ole Gunnar Solskjaer short of options up front, with Anthony Martial and Mason Greenwood the only two strikers currently at his disposal.

And Van Persie thinks his former club will be active in the transfer market in the next couple of weeks.

“I do believe that he’s [Ole Gunnar Solskjaer] not using those words, because otherwise you have the headlines and stuff, but I think they’re quite eager for a striker. Because they need one," he told Premier League productions ahead of United's meeting with Burnley on Wednesday.

“Short-term, but long-term as well. I think it’s good to have competition at the club of the calibre of Manchester United. You need to have constant competition. So I’m pretty convinced that they are pretty eager to get a striker in.

“Then with the first team after I made my debut I played another six months, Sunday-Thursday, Sunday-Thursday. And then I had a similar injury, a stress fracture in my lower back. I was out with that for four months.

“You can’t really do much, you have to just rest and let it heal. But it is a difficult one because it always stays a little bit like a weak spot. Even now, it is not that I’m in pain or something, but it’s a sensitive area. So you have to be really careful with that.

“They will miss him so much. Like I said before, he is their MVP, their best player, creates the most, scores the most goals, even at that age. So it’s a big blow for Manchester United.”