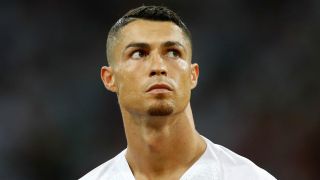 Former Real Madrid and Roma forward Julio Baptista believes Cristiano Ronaldo could help Serie A "get back to the level of the past" if his move to Juventus goes through.

Speculation over a transfer worth around €100 million to take the Portuguese star to Turin has increased since his country's elimination from the World Cup and Baptista said the capture of the five-time Ballon d'Or winner would be a coup for Italian football.

Baptista made the journey from Spain to Italy himself when he followed a three-year spell in Madrid with three seasons at the Stadio Olimpico and he said Ronaldo would be a good addition to Massimiliano Allegri's side.

"Serie A needs to change a few things to get back to the level of the past," Baptista told reporters. "Cristiano is a great player so it [Serie A] will improve, definitely.

"I think a few changes are needed to improve Serie A. It is not as good as it was 15 or 20 years ago.

"Juventus would have a stronger team with Cristiano, more competitive, they would have an advantage. We will have to see, but it's a really good signing."

Ronaldo is Madrid's all-time leading goalscorer, having netted 450 goals in nine seasons at Santiago Bernabeu, and Baptista said the club would struggle to replace the 33-year-old forward.

"For Madrid it would be a very big loss," he said.

"As much as people can say what they want about Cristiano, he has been a player who has left a tremendous mark on Madrid and the Spanish league as well.

"He has the best records in the league and in Madrid."