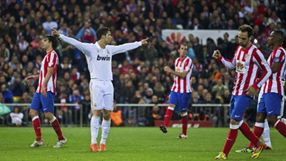 Real had seen their lead over their arch rivals whittled down to one point after Sunday's 0-0 draw at home to Valencia and Barca's 4-0 win at home to Getafe on Tuesday and needed a win to keep their bid for a first title in four years on track.

Ronaldo was the difference between the sides at the Calderon and the Portuguese international smashed in a free-kick to open the scoring in the 25th minute before Radamel Falcao nodded an equaliser 10 minutes into the second half.

Atletico, who have not beaten Real in almost 13 years, pressed forward in search of an unlikely winner but Ronaldo made it 2-1 in the 68th minute when he drifted in from the left and arrowed a long-range shot over goalkeeper Thibaut Courtois.

The goal incensed some of the home fans and they pelted the Real players with plastic bottles as they celebrated together in the corner of the pitch.

Atletico defender Diego Godin felled Gonzalo Higuain in the penalty area around 10 minutes from time and Ronaldo stroked the spot-kick past Courtois for his 40th league goal of the campaign, equaling the La Liga record he set last season.

He is one ahead of Barca forward and World Player of the Year Lionel Messi, who scored the Spanish champions' second goal on Tuesday.

Ronaldo, who sent Jose Callejon clear on the right in the 88th minute to score Real's fourth, said he and his team-mates had been feeling the pressure after Barca's victory.

"We were a bit tense as we knew that Barca had won yesterday and we had to win," Ronaldo, who is the first player in the history of Europe's top four leagues to net 40 goals in consecutive seasons, said in a television interview.

"I am very pleased that the team won, that I scored and set up a goal and we have to carry on in the same way.

"There is still some way to go in the league but we are closer to the title now."

Real, who play at Barca's Nou Camp stadium on April 21, have 82 points from 32 matches, with Barca on 78. Europa League semi-finalists Atletico are ninth on 42 points and in danger of missing out on a place in Europe next season.

In the earlier kick-offs, Valencia climbed above Malaga into third and an automatic qualification slot for next season's Champions League when a Jonas double helped them to a 4-1 win at home to Rayo Vallecano.

Jordi Alba and Pablo Hernandez also struck for the Europa League semi-finalists, who have 52 points.

Valencia's less illustrious city neighbours Levante missed a chance to go fourth when they surrendered the lead and lost 3-2 at relegation-threatened Sporting Gijon.

They stay fifth on 48 points, two behind Malaga who play at struggling Villarreal on Thursday and can reclaim third with a win at the Madrigal.

Athletic Bilbao, who are also through to the last four of the Europa