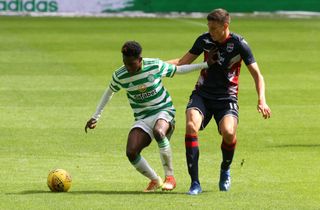 Rotherham are reported to have lodged an opening offer of £300,000 while Shrewsbury, Fleetwood and Sheffield Wednesday are also rumoured to be keeping tabs on the striker.

But the Staggies are looking for a seven-figure fee for the 24-year-old and Kettlewell says his club have made it clear to Stewart’s suitors that the current sums on the table are nowhere near acceptable.

He said: “There’s been another couple of bids for Ross Stewart but they have still fallen seriously short of the mark of what we value the player.

“There is no change on our position. We’ve been pretty transparent with the interested parties on how we value the player and each time (the bid) has come up significantly short.

“I’ve spoken to Ross’ representative. There’s no change to the situation. We’re comfortable with it and so is he.”

County host champions Celtic on Saturday and hope to have 300 fans at the Global Energy Arena to cheer on Kettlewell’s team as part of a test event for new Covid-19 safety measures.

“We’d be delighted, even if it’s in small numbers, just to get some of our supporters back in the ground,” said the Dingwall boss.

“I know from speaking to a lot of the locals that they are desperate to get back in at the earliest opportunity.

“If that is this weekend then we’ll be delighted. I can’t sing the praises of the club enough. We’re a small club but when you see what a small band of people at this club has done, then they have been absolutely terrific.

“We haven’t missed a beat throughout this whole process. We have a small following of fans but they are very loyal and even to get a small percentage of them in will be a huge boost to the players and to myself.”

Kettlewell will be in the dugout this weekend but faces a touchline ban further down the line after being hit with a Scottish Football disciplinary charge. The Staggies manager has been cited over comments he made about referee John Beaton following last month’s defeat to Livingston.

He branded the official “arrogant” and will learn his fate at a Hampden hearing a week on Thursday. But Kettlewell admitted he regrets the whole affair.

“We have responded to it and we’ll see how the situation pans out,” he said.

“I need to tread carefully with what I say. It’s a situation I’d rather not be in.

“I had a bit of passion after the game. I thought I was factual with what I was saying but as such I’ve received a notice of complaint.

“I’ll accept my fate. We’re all trying to do the best for our teams and sometimes that means you cross the line. If I’ve crossed the line I’ll always stick my hands up. I’m probably too honest at times.

“It looks like I’m facing more than one charge and I’ll always hold my hands up when I feel I’ve been wrong and I’ll acknowledge there are aspects of what I’ve done that are wrong.”