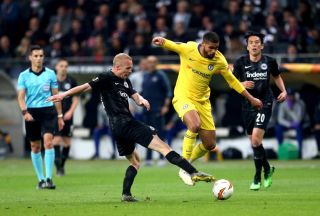 Chelsea midfielder Ruben Loftus-Cheek has pledged to become “stronger, fitter and faster” as he continues to manage a long-term back injury.

The 23-year-old has again had to battle his back ailments this term, as issues that date back years have continued to restrict his development.

Blues head coach Maurizio Sarri has admitted Loftus-Cheek’s ongoing condition has led to staccato availability this term, but now the England international believes he is ready to put those woes behind him.

“It’s really good, I’ve been working hard; I haven’t felt my back in a while, so those are really good signs and I hope to build on that,” said Loftus-Cheek.

“I can only get stronger, fitter and faster. So for me I just keep my head down, keep working hard, keep a positive attitude. Hopefully the injury’s calmed down and I can play regularly.”

Luka Jovic headed Eintracht into an early lead at the Commerzbank Arena on Thursday, with Chelsea worryingly slow out of the blocks.

Sarri’s men rallied quickly however with Loftus-Cheek teeing up Pedro on the stroke of half-time.

The visitors spurned several fine chances to take a lead back to Stamford Bridge ahead of Thursday’s second leg, but Loftus-Cheek still relished the experience.

The Blues host Watford in their final home Premier League match of the campaign on Sunday, with Loftus-Cheek admitting Chelsea must quickly switch focus back into domestic mode.

“That was my first competitive semi-final at a high level and I really enjoyed playing in the game, in a fantastic stadium with a fantastic atmosphere,” Loftus-Cheek told Chelsea TV.

“That’s what football’s about and hopefully I’ll have many more semi-finals in the future, and a final soon.

“I thought Jorginho was fantastic in the second half, which gave me and N’Golo (Kante) the space to turn and attack players.

“The business end where the games really matter, that’s what football’s about and I really love being a part of that.

“It’s difficult if you play in the Europa League because you’ve got to switch your mentality to the Premier League really fast.

“So now we’ve got to switch our attention really quickly for another big game.”