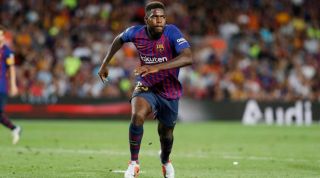 The France international, who helped Les Bleus triumph at the 2018 World Cup, has struggled for game time at the Camp Nou this season, making just five league appearances.

According to El Desmarque, Barcelona have not forgiven the player after his agent offered him to rivals Real Madrid last year in an attempt to pressure the Catalan club into boosting his salary.

Real weren’t interested, and now a move to England appears to be the most likely outcome as the Spanish champions look to get the 26-year-old off their books.

Umtiti has struggled to return to the form he showed at Russia 2018 since suffering a serious knee injury last season.

But that hasn’t stopped Arsenal, Tottenham and Manchester United from making an approach to sign the centre-back.

The trio of English clubs appear to be the frontrunners for Umtiti’s signature during the January transfer window.

Umtiti has struggled with injury again this season, missing out on two months of football with a foot injury at the start of the campaign.

He returned to action in November, but has been an unused substitute in four of Barca’s last five La Liga matches.

The former Lyon stopper, who has a contract in Catalonia until June 2023, has started just six games in all competitions this season.