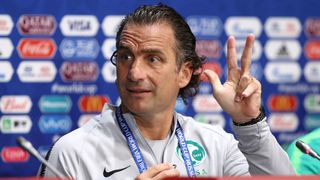 Embattled Saudi Arabia coach Juan Antonio Pizzi revealed the team has received no official explanation for the fire that affected their flight to Rostov-on-Don, where they will seek to bounce back from a humiliating 5-0 defeat suffered against Russia in the opening match of the World Cup.

Saudi Arabia have endured the toughest start to the tournament of any side, as the unexpected thrashing at the hands of the relatively unfancied hosts was followed by a minor mid-air emergency during an internal flight from their training base near St Petersburg, as they prepare for a daunting assignment against Uruguay.

While Pizzi claimed the squad had faith in the pilot and crew and did not panic during the incident, he was surprised to hear an official statement had been released by the Russian transport authorities, with the players and staff apparently still unaware of the exact cause of the problem.

"Well, as for the event yesterday [Monday], you've seen the pictures, they speak for themselves, but we don't know anything else, we have had no further info," he said.

"We didn't feel afraid, we trust the pilots, we were cool and calm. The pictures point to some emergency but we didn't feel concerned and it won't affect our performance."

The Saudi defence proved singularly ill-equipped to cope with a Russia side that had not won any of their past seven friendly matches, and the challenge is only set to increase against Uruguay's heavyweight front two, Barcelona's Luis Suarez and Edinson Cavani of Paris Saint-Germain.

Somewhat optimistically, Pizzi insisted the focus of the Saudi team will not merely be suppressing the threat posed by Uruguay's attackers, but repairing the damage done to their reputation in the humiliation against Russia.

"All the matches are different and tactical plans are also differ depending on your opponent," Pizzi said.

"Also, individual qualities of players tend to differ. Precisely because, as you rightly said, they have two players in attack who are world-class players.

"We have other priorities, more important than worrying about Cavani and Suarez. We have to prove we are at the same level of quality as they are."

Midfielder Taisir Al-Jassim, meanwhile, claimed his team-mates have already put the defeat in Moscow and the engine fire behind them and are determined to restore the faith of supporters in the team.

"Now that we have come to the hotel we have forgotten all the events that took place," he said.

"We are focused on the match with Uruguay. Each and every player aims at changing the image that we have conveyed because it is not the true image of Saudi football."