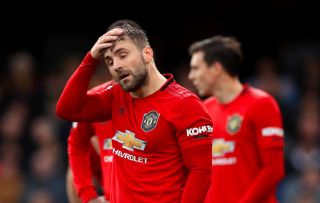 Luke Shaw says the Manchester United dressing room is kicking itself after failing to close the gap to the top four once again.

The final Champions League berth is up for grabs this season, given the inconsistency of the sides behind Liverpool, Manchester City and Leicester.

Fourth-placed Chelsea’s 2-2 draw at the latter gave United a chance to chip away at the six-point difference, but Saturday evening’s clash with Wolves ended goalless as Ole Gunnar Solskjaer’s men slipped to sixth.

Asked how the mood in the dressing room was after the match, downbeat full-back Shaw said: “To be honest, really, really disappointed, especially with the way the games have been going recently.

“We haven’t been picking up too many points and today was massive for us, especially with Chelsea dropping points.

“It seems to keep happening. Teams around us drop points and we don’t end up closing the gap and we are suffering from that and we needed to win today.

“Now we haven’t got a game so soon and that is quite annoying, but we’ll have a little break and of course we are looking forward to the big game when we get back.”

United have had a frantic winter fixture schedule and now do not have a match until travelling to top-four rivals Chelsea on February 17, with a warm-weather camp in Spain lined up.

“Maybe it’s nice to have a break but on the other hand with how the game went today, I’d rather have a game around the corner so we can put things right because we need to,” Shaw said.

“But that’s not the case, there’s the break.

“We’ll regroup, have a little break but obviously focus because it’s not the end of the season yet.

“Look, (Chelsea) is a massive game and one we seem to love playing in.

“We have played them probably quite a lot as well in the cups and stuff.

“We will have a few days off and then train very hard to get ready for that game because we know it’s going to be tough.

“We want to close the gap and we need to beat them.”

United will need to show a cutting edge if they are to get a much-needed win at Stamford Bridge, having failed to score in three successive Premier League matches for the first time since October 2016.

Big-money signing Bruno Fernandes looked the Old Trafford giants’ greatest threat on Saturday, with the midfielder putting in a promising performance on his debut.

“He’s only been able to train with us once and that was a very light session,” Shaw told MUTV.

“But we’re all looking forward to seeing what he can bring, and we’ve seen that he’s a fantastic player. Everyone knows that he is.

“Of course today was not an easy game to come into but I thought he did well and there’s good signs of things to come.

“We’ll all help him, and we’ve got a nice training camp to make him feel welcome.”

Wolves had their own Portuguese debutant in the shape of Daniel Podence and also head to Spain on the back of a match that Romain Saiss felt his side could have done better in.

“I thought it was a tough game,” he said. “We knew that before the game that it would be tough here, like always. We did well and we defended well as a team.

“We can do maybe better in the counter-attack because we had the opportunity to kill the game off, but we didn’t do it.

“We had some chances on set-pieces, I had two which I missed, so I was a little bit upset at myself, and I have to do better.

“But if you look at the game, I think the result is normal and it’s a good point.

“Now we have to be focused on the next game in two weeks against Leicester because it will be tough also.”