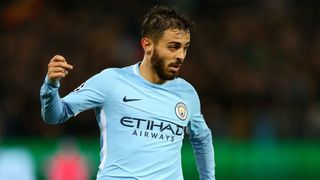 Bernardo Silva says he getting up to speed with life at Manchester City after Pep Guardiola's side opened up their Champions League campaign with a dominant 4-0 victory over Feyenoord.

The Portugal international joined City at the end of May from Monaco for £43million, but endured a shorter pre-season due to his involvement in the Confederations Cup.

But Silva is feeling sharper as he continues to train with his new team, having combined impressively with fellow playmakers David Silva and Kevin De Bruyne in Rotterdam on Wednesday.

"I'm feeling better and better," he told his club's official website. "It's normal; it's been more than one month that I have been training with the team."

The 23-year-old also highlighted the intensity of the Champions League in the midst of a schedule where there is little let-up for a squad battling to win honours at home and abroad.

"These games are always intense," he added. "It's always at a high level and we have to be well prepared.

"We know that the players in the starting 11 and on the bench have a lot of quality. That's good as we have a lot of games and you know you can't play all of them."

City now head into a run of four fixtures in the next 10 days, starting with a Premier League trip to Watford, and De Bruyne will aim continue a fine run of individual form at Vicarage Road.

The Belgium international is playing in a slightly deeper midfield role than the one he filled when he moved to the Etihad Stadium as a club-record signing from Wolfsburg in 2015.

As in last weekend's 5-0 win at home to Liverpool, De Bruyne dazzled in Rotterdam, with Guardiola hailing him as "one of the best players I've ever seen in my life".

"I've learned so much from players like David Silva, Fernandinho and Yaya Toure so I think I'm improving my all-round game," said De Bruyne.

"I like it [his current position]. The guys who have come in are able to dribble and are quick whereas I feel I'm more of a passing player.

"Throughout my career, I've always said that as I go along, I will start to play a deeper role because of the extra bullets I have in my armoury in contrast to the more wing-attack players

"I'm not getting as many goals as I did in my first season, but I'm not playing as advanced as I was then. That said, I get just as much pleasure from an assist, if not more."