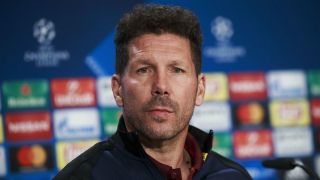 Diego Simeone gave a strong indication that he will still be Atletico Madrid head coach next season after claiming his presence, as a hologram, at an Audi Cup news conference was proof of his commitment.

Doubts over the long-term future of Simeone in the Spanish capital have persisted throughout the season, with the Argentine admitting to his desire to coach Inter – who he represented during his playing career – in the future.

Speculation of a San Siro return has gathered pace following the Nerazzurri's sacking of Stefano Pioli this week.

But Simeone – who led Atleti to LaLiga glory in the 2013-14 season – suggested that, at least for the time being, his future remains with his present employers, hence his appearance at a media conference to promote the pre-season Audi Cup tournament.

When asked about his future, Simeone replied: "We are talking to you, so it seems I will be the manager next season if everything goes right with the club. We will see each other in Germany very soon."

Atleti will be competing alongside Bayern Munich, Liverpool and a fourth team, to be confirmed at a later date, at the tournament in Munich.

"We are very glad how Atletico Madrid are growing these past years, so we have this chance of playing this tournament," he added.

"It's a great step to start the new season with strong pace. We weren't used to [playing] these kind of matches.

"We will take advantage of this because to grow we need to play these kind of friendlies... it will be a clue [of] what we are facing next season."