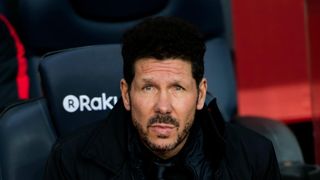 Diego Simeone refused to discuss being linked with Paris Saint-Germain after a comprehensive Europa League win for his Atletico Madrid side.

With Unai Emery expected to be relieved of his duties by PSG after their Champions League last-16 exit at the hands of Real Madrid this week, Simeone is reportedly a contender to take over.

But after his team put a foot in the quarter-finals of the Europa League with a 3-0 home defeat of Lokomotiv Moscow on Thursday, Simeone indicated he is fully focused on Atletico.

"Celta Vigo," Simeone replied when asked about the PSG job, referring to Atleti's next LaLiga opponents.

Simeone has been in charge of Atletico since 2011, winning the Europa League the following year, claiming the LaLiga title in 2014 and reaching a pair of Champions League finals.

But the Argentine has regularly been linked with a move away from Atletico, with Premier League side Everton among the clubs reportedly interested in the 47-year-old.

Simeone was more forthcoming on Atletico's performance as they hunt a record-equalling third Europa League crown, Lokomotiv soundly beaten at the Wanda Metropolitano.

"In the whole match we were superior," Simeone said. "In the first half we did not play so well, had to answer some questions that they had posed.

"In the second half we stopped them better. With three in between we had more tranquility and the game was more continuous and fast.

"We will have to adapt in the best way so that this result has weight in the second leg."

With goalkeeper Jan Oblak ruled out with a hand injury, Axel Werner kept a clean sheet on his Atletico debut, although the 22-year-old was rarely called upon.

"He is a young goalkeeper who transmits confidence and tranquility, even though they have not tested him," Simeone added.

"It is something that has also happened with Oblak, so the important thing is how he feels.

"We trust him. He has grown a lot since he arrived."