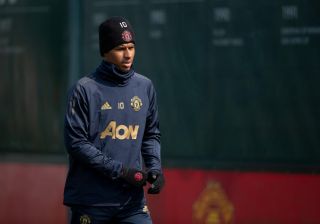 Manchester United boss Ole Gunnar Solskjaer is hopeful Marcus Rashford will be available for their Champions League quarter-final clash with Barcelona on Wednesday.

But Solskjaer told a pre-match press conference: “He needed the extra warm-up and hopefully he won’t get a reaction. He joined parts of it (training) at the end. Let’s see tomorrow. Hopefully he’ll be ready.”

Solskjaer confirmed Eric Bailly and Antonio Valencia would miss the meeting with the Catalan giants, but revealed Nemanja Matic could be available, while Ander Herrera was likely to miss out.

All four players, who, like Rashford, missed last week’s Premier League loss to Wolves, were absent from the open part of training.

“We still hope maybe that Nemanja can be ready, Ander is probably out and Eric and Antonio are definitely out,” Solskjaer added.