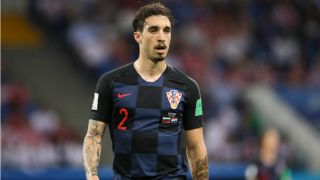 Rumours persist that the Nerazzurri are nearing a deal for the 26-year-old Croatian, who starred in the World Cup as his country reached the final for the first time in their history.

Such a deal could come as a surprise after Vrsaljko extended his contract in February, signing a fresh four-year deal.

But Spalletti has done little to quash the speculation, telling Calciomercato.com: "We like Vrsaljko. The directors are working, certain things will be defined once our preparations begin, when our squad is more settled.

"As more days pass and we approach the deadline, the situations change.

"We're working on the pitch, so [Piero] Ausilio [sporting director] and [Giovanni] Gardini [chief administrator] are thinking about it. You also know the positions we need covering."

Inter have been busy in the transfer market so far this window, bolstering their ranks with the signings of Radja Nainggolan, Lautaro Martinez, and Matteo Politano.

They have also secured the free transfers of Kwadwo Asamoah and Stefan de Vrij from Serie A rivals Juventus and Roma respectively as they gear up for their first Champions League campaign since 2011-12.