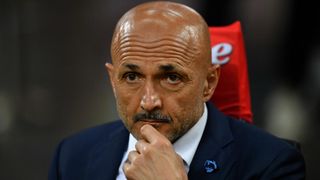 Inter went down 5-4 on penalties against Chelsea after Saturday's International Champions Cup clash ended 1-1 in Nice.

The Serie A side have been busy in the transfer market, signing Radja Nainggolan, Lautaro Martinez, Stefan de Vrij, Kwadwo Asamoah and Matteo Politano.

"Transfers? We don't have many spare parts right now," Spalletti said. "I'd like to make it known that we've played a lot with the same players, without those who are injured and have been with their national teams."

Spalletti added: "It's the speed ​​in implementing quality that makes the difference. Vrsaljko? There are no problems, the club have a plan in mind and we have to wait.

"It seems clear to me that the market isn't over yet. Whoever finishes top of our league has two teams for when you go to play in the cups, which take away your energy, or after two or three days, when you have to change six players.

"Then there are injuries. We need another goalkeeper, Icardi's deputy…  That's how it goes, so we're working towards it and we're close to completing our squad."