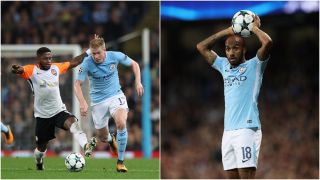 Shakhtar Donetsk were the second Ukrainian opponents to visit the Etihad Stadium in the Champions League and, when their compatriots Dynamo Kiev turned up here two seasons ago a surreal atmosphere gripped the ground.

City reached their first, and still only, quarter-final in Europe's premier competition courtesy of a forgettable 0-0 draw, but any prospect of a party atmosphere evaporated when Vincent Kompany's calf injury woes struck again in the fifth minute.

Kompany's struggles for fitness have defined a City side too often short on the big occasion over recent campaigns. Without him, belief and any semblance of defensive solidity have tended to evaporate.

But maybe, amid this swashbuckling start to the season and with their club captain again sidelined, Kompany is not the most important defender in Pep Guardiola's squad. The only problem is that man is injured too.

Mendy, who appeared in the stands with a pair of crutches, has been a breath of fresh air on and off the field since arriving from Monaco during the close season. The France international gives Guardiola an irresistible dynamism out wide that his aging defenders last season were ill-equipped to deliver.

But during an extensive squad overhaul, the City boss left himself short at left-back. Mendy is his only specialist in the position and arguably the last player he can afford to go down to a long-term injury. It meant career midfielder Fabian Delph lined up on the left-hand side of defence against Shakhtar.

The debate over whether a manager blessed with such attacking riches was foolish to focus his deadline day efforts upon Alexis Sanchez will probably rear its head again during Mendy's absence but, with City well-stocked in his chosen position, Delph did himself no harm with an assured showing.

Indeed, during a nip-and-tuck first half that Shakhtar probably shaded, it was Kyle Walker – the most expensive right-back of all time – who endured anxious spells at the mercy of the twinkle-toed Bernard.

Another of the visitors' Brazilian contingent, Marlos, gained scant change from Delph and was substituted before the end.

The former Aston Villa captain tucked in-field to help build play in the fifth minute, undertaking a role regularly played by Bayern Munich's full-backs under Guardiola. Delph's sureness on the ball meant he was able to bring enough of his own virtues to the task, as opposed to embarking on the fruitless pursuit of a Mendy impersonation.

Twice before half-time, he intelligently launched counter-attacks and linked pleasingly with Leroy Sane for the electrifying Germany winger to almost open the scoring in the 41st minute.

An excellent Delph tackle on Bohdan Butko came shortly before City broke through in the 48th minute.

While the emergency left-back's capabilities were the big uncertainty of the evening for Guardiola, his sure thing stood up when it mattered most.

On more or less the same patch of grass where he sunk Paris Saint-Germain in the 2016 quarter-final, Kevin De Bruyne curled sumptuously into the top corner from 25 yards to continue a regal run of form.

De Bruyne was a goal machine from midfield under Manuel Pellegrini but he now vividly decorates matches with the full array of his talents.

A wasteful miss when played through by Gabriel Jesus before half-time showed one tool perhaps is not as sharp as it once was, but De Bruyne has many in his box.

The goal was his first of the season but the 26-year-old has been directly involved in 12 goals in his past 12 City games in all competitions, with nine of those being assists.

Eight of his past 10 City strikes have come from outside the box and there was a sense of inevitability when he drew his foot to land a hammer blow against Paulo Fonseca's fine side.

De Bruyne is a footballer with an innate feel for the big moments and designs on greatness. No wonder City want to tie him down to a longer contract; no surprise if weekend opponents Chelsea still rue his departure.

Sergio Aguero missed a penalty to take him level with the club's all-time record goalscorer Eric Brook and other slapdash finishing gave cause for concern before Raheem Sterling wrapped up the points a minute from time.

It meant Guardiola was regularly exasperated on the touchline but in Delph and De Bruyne – the stand-in and the specialist – he had reasons to be cheerful.