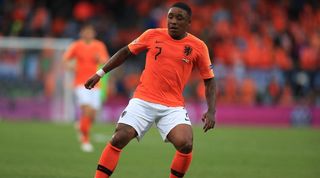 Steven Bergwijn has opened up on his delight at joining Tottenham from PSV.

Spurs completed the signing of the winger on Wednesday in a deal worth around £25.6m.

The 22-year-old has been in superb form for PSV this season, scoring five goals and providing 10 assists in 16 Eredivisie appearances.

The Netherlands international arrives in north London with Spurs aiming to secure a top-four finish in the Premier League.

And Bergwijn says he has always wanted to work under Jose Mourinho and play in England's top division.

"The Premier League, that is the highest achievable [league] for every football player," he told De Telegraaf before the transfer went through.

"Yes, this is certainly a dream come true. It also feels like the right time to take this step.

"I have always looked up to a top coach like Mourinho. And now I'm going to play for him.

"It's great to be here. Just look at the facilities around us. When I play FIFA on the PlayStation, I almost always choose a team from the Premier League. I look forward to playing in that great atmosphere.

"Of course it will take some time to get used to, but it will all be all right. I think that my physical condition is also good for the Premier League. I believe in myself and I really know that I am not there yet. Of course I have played many matches in the Eredivisie. England is a bit different, but I know what I can do.

"I come here to win prizes. So also the Champions League, yes. The club has already shown last year that they can get far. I hope I can show people quickly that I can be important."

Spurs return to Premier League action with a home game against Manchester City on Sunday.