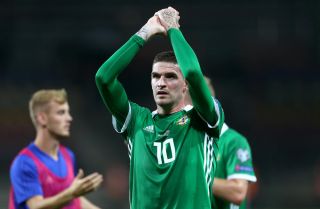 The 32-year-old is out of contract following his spell in Norway with Sarpsborg 08 and is on a list of frontmen the Black Cats are considering to bolster their attacking options as they target promotion from League One.

Speaking at his pre-match press conference ahead of Saturday’s home clash with leaders Wycombe, Parkinson said: “Kyle is one of a number of players we have been speaking about here as a staff. He’s a free agent and he’s on our list.”

Sunderland have also been linked with Burton’s Liam Boyce, although the manager was giving little away on that front.

Meanwhile, Parkinson revealed that Republic of Ireland international midfielder Aiden McGeady’s future remains unresolved after he was told he could leave the club this month.

Asked if there had been any developments in the 33-year-old’s situation, he said: “No, not at the moment. There have been no firm enquiries – certainly to me – about Aiden, but I would imagine in the next week or so, things will pick up in that area.”