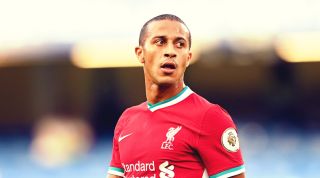 It was Sadio Mané who won Liverpool the match against Chelsea yesterday, with two goals - the first of which was a well-taken header, the second more of a comical error from Kepa.

Mané undoubtedly deserved the man of the match award and was even involved in the game's other big turning point, when Andreas Christensen pulled him down and received a red card.

But while Super Sadio decided the scoreline - a special mention Alisson's penalty save, by the way - eyes were cast towards Thiago Alcantara, who came on at half-time for his Liverpool debut and completely ran the show for the Reds.

Having only just arrived for around £25m from Bayern Munich, Thiago looked fresh, dictating from the No.6 role for his new teammates. After just 45 minutes of Premier League football, he has racked up a whopping 18 passes into the final third already.

Arsenal's Granit Xhaka is the only player to have managed more passes into the final third so far in this young Premier League season. The Swiss metronome has 25 - but that's in four times the playing time of Thiago.

When you how long each player has actually been on the pitch, the Spaniard is leading the stakes, with more passes into the final third per minute than any other player. Harry Maguire managed 13 passes into the final third during his first 90 minutes this season against Crystal Palace at the weekend - which would also place him high up on those stakes, but still way behind Thiago's numbers.

It's perhaps not surprising to see a few names on the graphic. James Rodriguez has been electric so far in an Everton shirt, linking up nicely with his new colleagues, while Andrew Robertson has been solid in his first two appearances, too. Even Maguire isn't really a surprise, given how he marauds from the defence to help Manchester United pen in their opponents.

Youri Tielemans has more of a burden of playmaking in James Maddison's absence over at Leicester City, while Fulham - who Harrison Reed has racked up 160 midfield minutes for, so far this season - hit three goals past Leeds United last weekend in a pinball-esque defeat, and had good periods of possession in Arsenal's half, despite losing 3-0 on the opening weekend.

Three Southampton players on the list, however, is a little conflicting with the Saints' early form. Though they had spells against both Tottenham Hotspur and Crystal Palace where they created chances, they've lost both games. Perhaps Ralph Hasenhuttl could be looking at why three defensive players in Jan Bednarek, Oriel Romeu and Kyle Walker-Peters have all delivered more final-third passes per 90 minutes than more likely candidates such as James Ward-Prowse and Che Adams.

While it's still early in the season and this list of 12 players is likely to look hugely different over the course of the season, there's no doubt that if Thiago slots into Jurgen Klopp's side without too much of a transition, he'll probably top this stat come May.

While you’re here, why not subscribe to the mag - and get every issue delivered to your door!