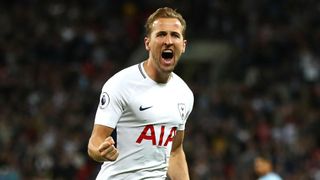 Tottenham secured their place in next season's Champions League and moved up to third in the Premier League with a 1-0 victory over Newcastle United at Wembley.

Harry Kane's second-half goal let an out-of-sorts Spurs team off the hook after they were second best at times versus Rafael Benitez's determined Newcastle side on a tense evening in north London.

A run of only one win from four league matches and a defeat to relegated West Brom left Mauricio Pochettino's men needing a drastic improvement against the Magpies but their performance lacked conviction and key players failed to deliver.

After a frustrating first half, a move involving Dele Alli, Kane and Son Heung-min produced the kind of cohesive, fast passing that was Spurs' trademark earlier in the season and the England marksman's finish was sublime.

A fourth consecutive defeat was harsh on Newcastle, whose craft and positivity belied their mid-table status and whose determination suggested they were chasing much more than ninth place – a position that is now out of reach for them this season.

Spurs, meanwhile, have leapfrogged Liverpool into third in the table and cannot finish lower than fourth, which will come as a huge relief to the supporters who have seen their side's form and confidence crumble towards the end of the season.

FULL-TIME: 's strike secures a top-four finish and a place in next season's group stages! May 9, 2018

Tottenham piled forward from the off and Newcastle goalkeeper Martin Dubravka pulled off a stunning one-handed save to keep Christian Eriksen's curling 20-yard free-kick from finding the top-left corner of the net.

Newcastle countered and went agonisingly close to scoring through Jonjo Shelvey, whose edge-of-the-box free-kick clipped the outside of the post on its way wide.

All of a sudden the home side looked rattled and found themselves pinned back in their own half as Newcastle forced a corner from which Jamaal Lascelles would have scored had his powerful downward header not been saved acrobatically by the diving Hugo Lloris.

The first half then swung from end to end, with Dwight Gayle heading over the crossbar before Jan Vertonghen strode forward and drilled a shot into Dubravka's midriff from 20 yards, and there were further chances for Gayle and Kane but both strikers fluffed their lines.

Mohamed Diame headed wide within seconds of the restart before Spurs finally came to life on 50 minutes, Dele Alli jinking towards the box where Kane exchanged passes with Son before hitting a pinpoint first-time shot into the top-right corner of the net before Dubravka could react.

Undeterred, Newcastle applied yet more pressure on the Spurs defence and Lloris had to slide at the feet of Ritchie to prevent him from equalising in a crowded penalty area just before the hour mark.

Kenedy then drilled a low shot just wide to the left of the goal before substitute Jacob Murphy burst down the left flank and found himself one-on-one with Lloris, only to fire over the crossbar from close range as the equaliser that would have delighted the travelling fans and kept Tottenham's Champions League hopes in the balance never arrived.