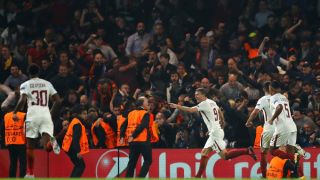 An absorbing clash at Stamford Bridge was marred when a section of supporters were heard targeting defender Antonio Rudiger, who left Roma for Chelsea in the transfer window.

Visiting fans have been accused of making "monkey chants" after the Germany international shielded the ball out of play while under pressure from forward Stephan El Shaarawy.

UEFA confirmed the case will be examined by its Control, Ethics and Disciplinary Body on November 16, a little over two weeks after the return fixture takes place at the Stadio Olimpico.

Spartak Moscow were charged over a similar offence relating to a Youth League match against Liverpool on September 26.