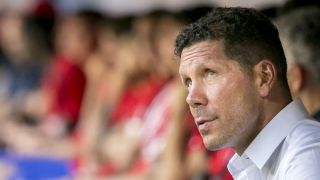 Diego Simeone believes his Atletico Madrid team are moving in the right direction despite being held to a goalless draw at Valencia.

Atleti were on top for significant spells at Mestalla but mislaid the clinical edge that saw them put Las Palmas to the sword 5-1 before the international break.

Nevertheless, Simeone - who signed a contract extension running until 2020 this week - felt his team's overall play was better than in Gran Canaria and a significant improvement from scraping a 2-2 draw at Girona on the opening weekend.

"The worst was the first time in Girona," he told a post-match news conference, after his side joined city rivals and champions Real Madrid in taking five points from three matches.

"The game at Las Palmas was good and today was very good. We missed the goal but, as for our play, the team showed important things.

"It was a good football match between two teams working similarly. We were much more incisive in the vicinity of the area and had chances to win the game.

"It made for a good game and we played well but the most important aspect is the goal did not arrive."

Thomas Partey started consecutive LaLiga games for the first time in his Atletico career and Simeone was heartened by an assured showing from the 24-year-old Ghana international.

"He is a player who is growing, who has desire, enthusiasm and ambition," he added. "I hope he keeps getting better. He's young."