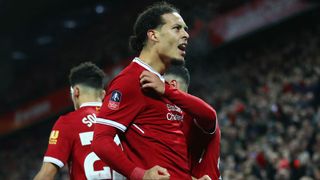 Liverpool defender Virgil van Dijk claims he is not intimidated by the expectations that have accompanied his big-money move from Southampton to Anfield.

Jurgen Klopp's team parted with a "world-record" reported £75million fee to lure the Netherlands international away from St Mary's Stadium.

Signed to reinforce the Reds' back-line, he began repaying that fee at the opposite end of the field by scoring the winning goal in a 2-1 FA Cup third-round victory at home to local rivals Everton last week.

As he prepares to make his first Premier League appearance for Liverpool in a crunch clash at home to runaway leaders Manchester City, the 26-year-old insists he is not concerned about his status as the world's most expensive defender.

"It doesn't make me nervous, it's a big compliment to myself for the hard work I've put in so far, that Liverpool are willing to pay that much money," he told Sky Sports.

"I can't change anything about that."

Asked what made his new side an attractive destination for a player who was also the subject of interest from Chelsea, the former Celtic man replied: "I think the size of the club, the fans, the players, the manager, the whole package here is amazing.

"You can see yourself that the atmosphere at every home game is amazing. I'm just very happy to play for the club."