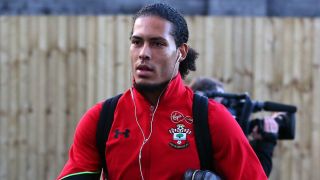 Virgil van Dijk will play for Southampton's reserves against Aston Villa on Monday in a bid to rebuild his fitness, Mauricio Pellegrino has confirmed.

Van Dijk has not featured for Southampton's first team since January due to an ankle injury, while he was the subject of strong transfer speculation during the window.

Liverpool were expected to complete a deal for the Netherlands international, who handed in a transfer request to try and force a move away from St Mary's in search of European football.

However, the Anfield club were forced to apologise over accusations they tapped up van Dijk and the centre-back ultimately remained at Southampton, with Pellegrino now planning to reintegrate the 26-year-old after his side took five points from their first four Premier League fixtures.

"You never know because you have to show on the pitch how [fit] you are," Pellegrino said. "Virgil is coming from a long period of time without playing a game. This is my concern right now.

"He will play Monday in the reserve team. We try to help him to be ready to help the team. He was training well this week. Now everything is normal."

A 2-0 home loss to Watford on Saturday made it three games without a goal for Southampton in all competitions and Pellegrino wants to see a rapid improvement from his side.

"Of course there are lessons to be learned," he said. "But we knew about what happened today before the game. There is a difference between the plan and the reality.

"In the reality they were, in some moments, better than us. They scored two goals and those types of goals change the mentality of the game.

"Hopefully we can change quickly," he continued. "We have another opportunity in seven days and we have to learn from today now and work harder to be prepared for next Saturday."