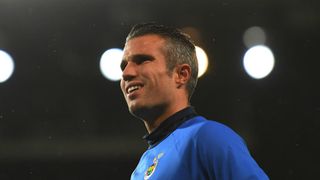 Robin van Persie has sealed his return to Feyenoord by signing a one-and-a-half-year deal with the reigning Eredivisie champions, prompting technical director Martin van Geel to hail the homecoming as "beautiful and special".

Fenerbahce agreed to cancel Van Persie's contract, allowing the former Arsenal and Manchester United star to re-join the club he left in 2004.

The 34-year-old will train with Giovanni van Bronckhorst's squad on Monday, having passed a medical.

"We have always said that Robin is more than welcome at Feyenoord and we are very happy that he now joins the squad," said Van Geel at the signing ceremony.

"It is beautiful and special that after Dirk Kuyt and Giovanni van Bronckhorst, among others, an icon returns to Feyenoord.

"With his enormous experience and great qualities as a player he can definitely be of great value to the team."

Feyenoord lie fifth in the Eredivsie following a 2-0 defeat to Ajax at the weekend and travel to Utrecht on Wednesday.