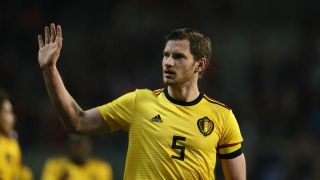 Jan Vertonghen has made history by becoming the first Belgium international to win 100 caps.

Vertonghen took the record from Jan Ceulemans, an attacking midfielder who made 96 appearances for Belgium between 1977 and 1991.

The 31-year-old centre-back will have a chance to add to his tally at the World Cup, with Belgium drawn alongside Panama, Tunisia and England in Group G.