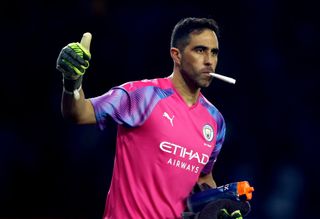 Claudio Bravo has left Manchester City after four years at the Etihad Stadium, the Premier League club have confirmed.

The Chilean goalkeeper, who joined City from Barcelona in 2016, was out of contract.

The 37-year-old had spent the past three seasons as second choice following the arrival of Ederson in 2017.

Bravo had been installed as number one by manager Pep Guardiola after his signing, replacing Joe Hart, due to his superior footwork.

But he endured an error-ridden first season and was thereafter largely confined to cup appearances.

He made 61 appearances for City, collected two Premier League winners’ medals and helped City to their recent Carabao Cup triumphs.