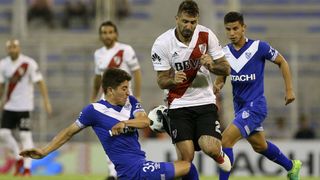 Villarreal have secured the signing of highly rated Argentine midfielder Santiago Caseres from Velez Sarsfield on a five-year deal.

The Yellow Submarine have been on the hunt for a defensive midfielder following the departure of Rodri to Atletico Madrid and Caseres, 21, is the man selected to fill the void.

Caseres remains inexperienced after only breaking into Velez's first team in 2017, but in that time he has reportedly drawn admiring glances from numerous European clubs, with Atletico said to have been one of them.

This season he has become a crucial part of Gabriel Heinze's side and is said to have collected Velez somewhere in the region of €10million.

have come to a transfer agreement with for , who will play for the Yellows for the next five seasons. Pure talent and Argentinean spirit for the midfield. Welcome, Santiago! July 16, 2018