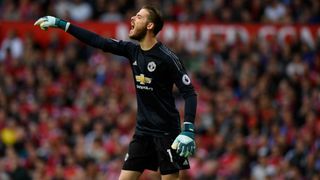 Ander Herrera sees no reason why Manchester United team-mate David De Gea would leave the club for Real Madrid, the midfielder adamant they are not far behind the Spanish giants.

De Gea has developed into arguably the world's best goalkeeper since joining United from Atletico Madrid in 2011 and is often linked with a return to his home city.

Real Madrid were reportedly close to signing the Spain international in 2015, but they ultimately missed out and a few days later De Gea committed himself to a contract which runs to 2019, with the option of another year.

Herrera expects that Madrid will probably come in for De Gea again in the coming years, but the 28-year-old is confident that United's trajectory has them on a similar level to the reigning European champions.

"I respect all the keepers like Manuel Neuer, Gianluigi Buffon and Marc-Andre ter Stegen," Herrera said. "But David right now is the number one in the world.

"He wants to be a legend at the club which is important for us. He has that quality. In Spanish we say it comes from God. He makes a difference. He intimidates strikers.

"David is really happy at the moment because we are fighting for everything. Real Madrid are going to talk about him every summer because he is the best keeper in the world. But we don't think we are far from Real Madrid."