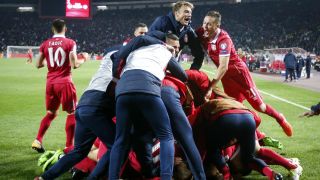 Nemanja Matic and goalscoring hero Aleksandar Prijovic revelled in Serbia's successful World Cup qualifying campaign after the Balkan nation booked their spot at Russia 2018 with a 1-0 win over Georgia.

Belgrade was in party mode on Monday as substitute Prijovic's 74th-minute goal sealed victory for the hosts, ensuring they made it back to the biggest stage in international football after missing out in 2010.

Manchester United star Matic had earlier seen his volley cleared off the line before Prijovic calmed any remaining nerves, with Ireland's win in Wales meaning a draw would ultimately have been enough for Slavoljub Muslin's men.

"We had a lot of pressure before this game," said Matic. "We wanted to play patiently, we knew that we would have a chance.

"I'm the happiest at this time. Thanks to the people who supported us.

"We showed passion in fighting for Serbia's jersey, not how to play the most beautiful football, because we did not play the best in this qualification, but how we fight and show why we are in Russia."

Prijovic, who plays for Greek side PAOK, added: "It can be said that this is the biggest goal in my career. I dreamed of getting an important goal for the country. We deserve this.

"When I scored the goal, I thanked God because I had dreamed of this my whole life."

Head coach Muslin, who took the role in May last year, was delighted to see the hard work pay off.

"For a year and a half we worked together, we worked hard all the time and I think we deserved qualification," he said.

"We have succeeded, I am proud of them, because this is their success, they are now entering history.

"This is definitely a historical result, after so many years we are at the World Cup. I would not take the team if I did not believe we could achieve this result. We believed in everybody from the very beginning."