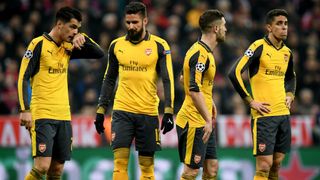 Arsenal manager Arsene Wenger lamented a "nightmare" finish to his team's embarrassing 5-1 loss at Bayern Munich in the Champions League.

Wenger's team are on the verge of a last-16 exit for the seventh straight season after the humbling defeat at Allianz Arena on Wednesday.

Alexis Sanchez had cancelled out Arjen Robben's opener to have the visitors level at half-time, but a brace from Thiago Alcantara and goals from Robert Lewandowski and Thomas Muller closed out a huge Bayern win.

Wenger rued the way his team finished the encounter, with Thiago scoring in the 63rd minute and Muller completing the rout late on.

"The real problems we faced were after the third goal. We lost our organisation and were mentally jaded," the under-fire Frenchman told a brief news conference.

"The last 25 minutes were a nightmare for us. It looked like we had no response."

The loss of captain and centre-back Laurent Koscielny to injury early in the second half triggered the Arsenal collapse.

Wenger said his team needed to deal with the enormity of the defeat, ahead of the return leg at the Emirates Stadium on March 7.

"Koscielny? I would have loved to keep him on the pitch. After that it is difficult to measure the real impact," he said.

"The fact is, we have to cope with the result. We have an extremely bad result."