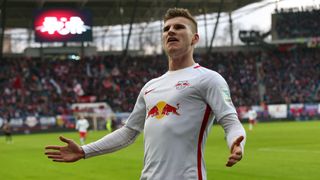 Timo Werner is adamant he is happy at RB Leipzig amid speculation linking him with a move to Liverpool.

The 21-year-old joined Leipzig from Stuttgart ahead of the 2016-17 campaign and has quickly developed into a key figure at the Red Bull Arena.

Werner has already netted 14 goals in 24 Bundesliga outings this term and his fine performances have not gone unnoticed elsewhere.

Recent reports suggested Jurgen Klopp is keen to lure the striker to Anfield ahead of next season, but Werner has made it clear he is not interested in a transfer at this stage of his career.

"I want to keep growing together with RB Leipzig and keep developing here," the striker told Welt am Sonntag.

"I am still only 21 years old and still have plenty of years ahead of me.

"I am very happy at Leipzig. Joining this club has been a stroke of luck. I have found my way again under Ralph Hasenhuttl."

Werner has a contract with Leipzig until June 2020.