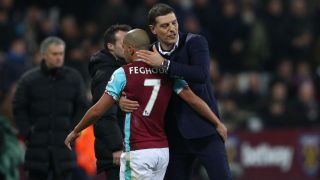 West Ham have appealed against the controversial red card shown to Sofiane Feghouli in Monday's 2-0 defeat to Manchester United.

The Algeria winger was sent off in the 15th minute of the contest at London Stadium, which marked his first Premier League start, after lunging into a 50-50 tackle with United defender Phil Jones.

Manager Slaven Bilic was left furious by the dismissal, claiming Jones had been the one who committed a foul, while referee Mike Dean was widely criticised with Gary Neville claiming it was a "poor decision" and former official Mike Halsey saying he "guessed".

And West Ham confirmed to Omnisport that the club have launched an appeal.

Feghouli has made 14 appearances for West Ham since moving from Valencia in June.