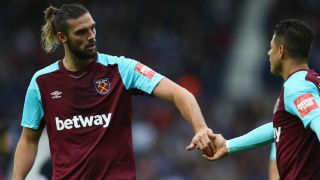 West Ham are taking a new approach to managing Andy Carroll's fitness in a bid to ensure he stays injury free for the long-term, says Slaven Bilic.

The 28-year-old has appeared in under half of West Ham's Premier League games for three of the last five seasons after multiple battles with injuries.

"Of course we have to manage him - he looks good, fit, he's training and hopefully he's going to last because that's been his problem for ages," Bilic said of Carroll, who has played two games since returning from a groin injury.

"He isn't going to play [on] Tuesday, for example. We tried to manage him last year, but it didn't help a lot.

"We are managing him a little bit differently this year. Maybe he could have played against Newcastle, but we knew there was the international break so we gave him two more weeks."

But Bilic conceded he is finding it difficult to come up with a strategy that will allow him to field Carroll in attack alongside star signing Javier Hernandez.

"I am thinking about them the most but it is hard to have them both in their natural positions," he said.

"It is hard to do that and then have three at the back, then with Michail Antonio and Marko Arnautovic, it is almost impossible."

"We are ambitious, yes we will make some changes, but we want to progress in the ." - Slaven Bilic September 18, 2017

James Collins will also miss the Bolton game after being ruled out for up to three weeks with an ankle sprain he suffered against West Brom.

"It's a big blow," he said. "It looked worse than it was. He has had his scan, hopefully he will only be out for a few weeks. I expected the worst."

On the Bolton game, Bilic added: "We will have a strong side, but with changes. It's a good opportunity for those players to impress.

"Yes we will make some changes, but we want to progress in the cup. It's a big game for us.

"We are very ambitious within the club and if you have a look at the round we played a few weeks ago, most of the clubs put strong teams out.

"The best would be to get an easy win and to rest some players ahead of Spurs, but it's never easy against Bolton."