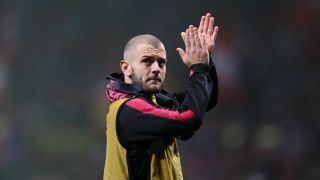 Jack Wilshere is excited by the tactics set to be used by West Ham manager Manuel Pellegrini, who he feels is not too dissimilar to his former boss at Arsenal, Arsene Wenger.

Wilshere is embarking on a new adventure at the London Stadium after spending his entire professional career at Arsenal before his release at the end of last season.

There has already been much upheaval at West Ham ahead of the new Premier League season, with the club giving a signal of intent by signing former Manchester City manager Pellegrini, as well as bringing in players of the standard of Wilshere and Felipe Anderson.

And Wilshere is excited by the prospect of playing for Pellegrini, who looks likely to set his team up in a way which could get the best out of the England international.

When asked if there were similarities between Wenger and Pellegrini, Wilshere told Omnisport: "A little, as you said he's experienced and has football knowledge.

"He's won the Premier League and I think I read that he's never finished out of European places with any of the clubs he's been at.

"He's a manager of great experience and he's great for me because he wants to play football, press high, play through the midfield and I'm really looking forward to meeting him."

Wilshere was linked with several clubs after leaving Arsenal, with Fenerbahce in Turkey said to have been among those interested.

But staying in England to boost his chances of an international recall was a primary reason for choosing West Ham.

"That was a big reason I wanted to stay in England, because I want to play in front of the scouts, England manager, being in everyone minds still," he added.

"I've always said if I'm fit and healthy I want to play for my country, I'm proud to, I've done it lots of times and I want to carry on.

"Obviously I spoke to a few clubs, but once West Ham came in, what with me growing up and going to Upton Park, I've always had a special bond with this club, so it was an easy decision in the end."